The KiVa program has launched!

antibullying
KiVa
Dear Reader, the content that you are reading was accurate at the time of publishing, but might have become obsolete since then.

This September, the research-based KiVa antibullying program, developed at the University of Turku, Finland, has launched in three Hungarian schools. As licence partners of KiVa, the Hungarian Institute for Educational Research and Development is the head of the pilot program and the leader of the adaptation of the antibullying program.

The introduction of KiVa was led by the licenced KiVa trainers of the Hungarian Institute for Educational Research and Development (HIERD): Balázs Fehérpataky (HIERD), Fanni Sólyom-Nagy (HIERD) and Éva Jármi (ELTE). During the two-day-long trainings, the pilot schools got acquainted with the details of KiVa: the program provides the school staff with information about bullying, and how to tackle it. KiVa includes 10 prepared lessons on how to function in a group, and how to recognize and fight bullying.  KiVa also offers a computer game which makes the material easily attainable. Furthermore, students fill out a survey before and after the school year. This way the school receives information that can help with planning the intervention in the subsequent school year. 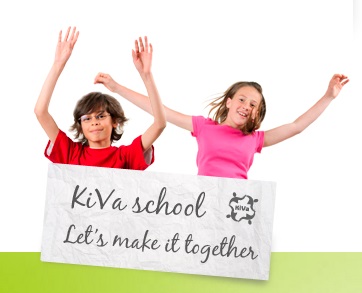 KiVa is a research-based antibullying program that has been developed at the University of Turku, Finland, with funding from the Ministry of Education and Culture. The effectiveness of KiVa has been shown in a large randomized controlled trial. In Finland, KiVa is a sought-after program: 90 % of all comprehensive schools in the country are registered KiVa schools implementing the program. KiVa is now being evaluated in several countries: the first international studies from the Netherlands, Estonia, Italy, and Wales are emerging, showing that KiVa is effective also outside of Finland.

KiVa is an innovative school-based antibullying program which has been developed using cutting-edge research on bullying and its mechanisms. KiVa program won the European Crime Prevention Award in 2009, Social Policy Award for Best Article in 2012 and four National Awards in 2008, 2010, 2011 and 2012.

Further information can be found on the international KiVa webpage.